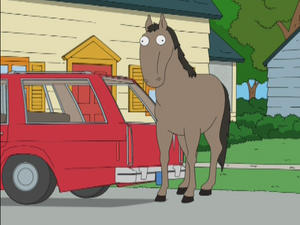 'Til Death was Peter Griffin's retarded horse he bought at an auction in Louisville, Kentucky. He bought it with money that his wife Lois gave him to buy a can of beans in "Family Gay". Peter decided to enter him in the Quahog Derby to promote himself as a horse breeder and sell horse sperm.

Unfortunately, the horse ran into the stands during it debut race, the Quahog Derby, and trampled several deaf children and an infant in separate incidents. It wore the purple 5 harness during the race. After it later died of a heart attack, Peter tried to dispose of the body by hurling it into Goldman's Pharmacy but owner Mort Goldman hurled it back into the Griffin Home at the end of the episode.

While alive it spent its time primarily just standing around the Griffin Home, licking or sucking strange things, or standing in inconvenient locations, and causing Peter to crash into Cleveland Brown's house.

Retrieved from "https://familyguy.fandom.com/wiki/%27Til_Death?oldid=166977"
Community content is available under CC-BY-SA unless otherwise noted.