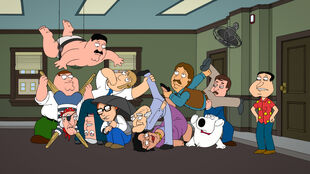 12 and a Half Angry Men
Mayor West goes on trial for murder. 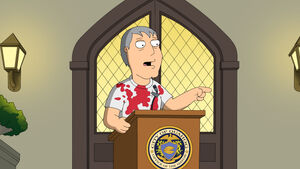 When an aide to Mayor West is found stabbed to death, evidence that the victim attempted to blackmail the Mayor points to West and he is put on trial for murder. Despite Tom Tucker's insistence on finding a quick decision of guilty, Brian is the lone holdout voting "not guilty" and he tries to persuade his fellow jurors that there's a reasonable doubt of the Mayor's guilt. His insistence frustrates the others who don't trust the Mayor because he is a politician. Brian's examination of the evidence points to inconsistencies. Brian agrees that if no one is convinced of the possibility of innocence that he will change but the vote comes up with an agreement from Herbert that there is a chance of innocence. The other jurors just want to go home. 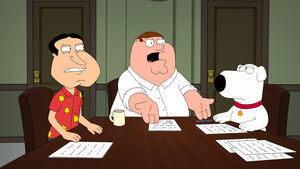