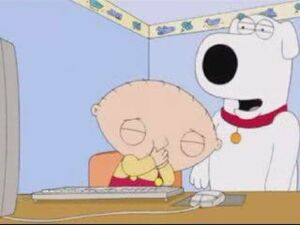 2 Girls, 1 Cup is the unofficial nickname of the trailer for Hungry Bitches, a 2007 Brazilian scat-fetish pornographic film produced by MFX Media. The trailer features two women conducting themselves in fetishistic intimate relations, including defecating into a cup, taking turns ostensibly consuming the excrement, and vomiting it into each other's mouths. "Lovers Theme" by Hervé Roy, from the movie Delusions of Grandeur, plays throughout.

This one-minute preview is a viral video that became a well-known Internet meme in itself, and for the reactions its graphic content elicited from viewers who have not seen such films before. Around mid-October 2007, video sites such as YouTube were flooded with videos depicting others' reactions to watching the video for the first time.

In "Back to the Woods", after Brian asks Stewie for help to get unhitched from his pole, Stewie refuses in retaliation for "making me watch that video with the two girls and a cup!" This is followed by a cutaway to Brian filming Stewie sitting at a computer watching an unseen video. He comments, "Okay, they're lesbians clearly..." and then proceeds to become surprised, shocked, and nearly ill as the video proceeds.

Retrieved from "https://familyguy.fandom.com/wiki/2_girls,_1_cup?oldid=152198"
Community content is available under CC-BY-SA unless otherwise noted.