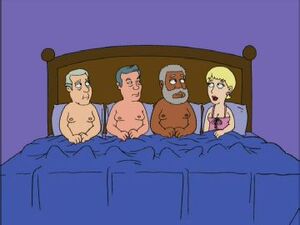 60 Minutes is an American investigative television newsmagazine, which has run on CBS News since 1968. The program was created by long time producer Don Hewitt who set it apart by using a unique style of reporter-centered investigation. It has been among the top-rated TV programs for much of its life, and has garnered numerous awards over the years. It is considered by many to be the preeminent investigative television program in the United States.

In "Death Is a Bitch", Peter and Lois watch 60 Minutes After Dark, a combination of 60 Minutes and the raunchy variety show Playboy After Dark. It shows 60 Minutes anchors Morley Safer, Mike Wallace, Ed Bradley, and Lesley Stahl in bed together, with Stahl commenting on how “one of you is hung like an elf.” The rest of the group look at Morley Safer.

Death is hesitant to be away from Wallace due to his age, as revealed in "Meet the Quagmires".

Retrieved from "https://familyguy.fandom.com/wiki/60_Minutes?oldid=145349"
Community content is available under CC-BY-SA unless otherwise noted.