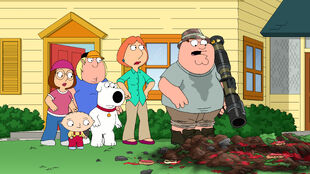 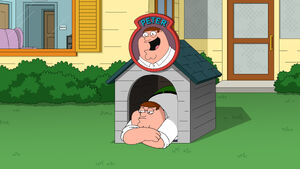 When Chris seeks advice with a girl, Peter points them in the direction of their VHS tape collection but this gets him in trouble when he tries to emulate scenes from 1980s teen comedies and Lois banishes Peter from the house. When she tries to point out his obsession with the 80s is unhealthy, he sets how to prove her wrong by reenacting scenes from his films, none of which have the expected result so Peter tries to emulate other decades until Lois gets fed up with all of his stunts. As Peter tries to ponder what he is without his obsession with the 1980s and considers leaping from a bridge, the ghost of John Hughes appears and tells him that Lois is right, and he needs to let the 80's go by making his own life in the moment. Satisfied, Peter can't resist pointing out his favorite moment from a John Hughes film is the giant pancake from Uncle Buck and asks if they have giant pancakes in heaven. Hughes admits he doesn't know because he's in Hell because he wasn't that good. 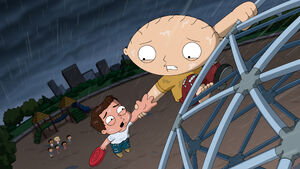 During Stewie's tumbling class, Doug manages to show him up without any previous experience and also steals the spotlight during preschool show and tell. But as Stewie tries to figure out a way to one-up him, Doug's frisbee lands on top of the jungle gym and Stewie decides to show how brave he is by volunteering to climb it the next day. At the designated time, Doug arrives to challenge Stewie to the top. The latter succeeds in beating him, but gets his foot stuck in the jungle gym as he starts back down. Doug stays back to help and remains with Stewie as a storm moves in, leaving them to bond. But as Stewie offers Doug back his frisbee, he runs out of their shelter and proclaims victory over his rival. Angered at being duped, Stewie frees himself and pursues him down the jungle gym as they fight over the frisbee. As Doug finds his grip about to loosen Stewie decides not to let him go down alone and they fall the last couple of feet, not being as high as they thought they were. After Stewie suggests someday their adventure might make a movie, he later finds himself cast with a non-heroic actor.