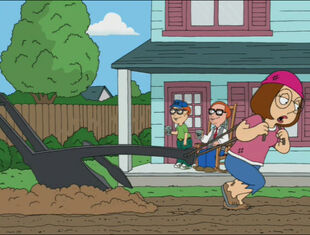 8 Simple Rules for Buying My Teenage Daughter
Peter sells Meg to the Goldmans. 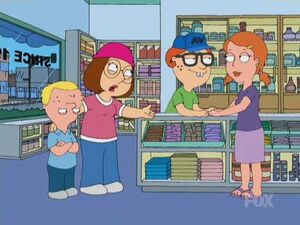 When Peter goes to the pharmacy to buy condoms, he realizes he has forgotten his wallet. Mort Goldman, the pharmacist, offers to open a tab for him; Peter quickly begins spending unnecessarily. He buys eight cases of syrup of ipecac so he can hold a vomiting contest with Brian, Chris and Stewie; however, it was a complete failure, although Chris technically wins. Soon Mort calls in Peter’s debt of $34,000. In desperation, Peter seizes upon a picture of Mort’s son Neil, who is infatuated with Meg. Peter offers to sell Meg to the Goldmans to settle the bill, offering a contract; Mort agrees, but everyone is shocked to discover that Neil has started dating another girl. Meg becomes unexpectedly jealous and hunts desperately for a boyfriend to make Neil jealous; she ends up settling for Jake Tucker, who only wants her to buy him things. She finally tells Neil that she wants to be his girlfriend and signs the original contract to prove her sincerity; the Goldmans quickly put her to work as a slave plowing a field in their front yard. Brian finds a clause in the contract stating that it is null and void if Neil cheats on Meg, so Peter convinces Lois to dress as Mystique and seduce him at a fake X-Men convention. Neil tells Meg that he only wants her to be with him if she wants to be with him, tears up the contract, and quickly reconciles with his previous girlfriend. Meg’s relief quickly gives way to renewed jealousy. 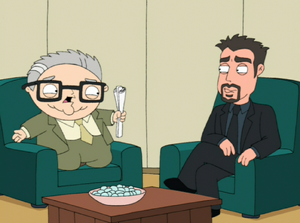 Meanwhile, after Meg had complained that she was tired of babysitting Stewie while their parents went out, Lois interviews candidates for a new babysitter. Stewie instantly falls in love with LaDawn, an attractive young applicant. LaDawn already has a boyfriend, however, and in a jealous rage, Stewie clubs him with a tire iron and locks him in the trunk of Brian’s car. When LaDawn rejects Stewie’s advances, he drugs her and tells Lois that she invited friends over and cause assorted mischief. Lois fires LaDawn, who departs tearfully after giving Stewie a mixtape. Stewie regrets his actions and pursues her, but she has disappeared. Weeks later, Stewie realizes that he forgot to release her boyfriend.

Retrieved from "https://familyguy.fandom.com/wiki/8_Simple_Rules_for_Buying_My_Teenage_Daughter?oldid=216389"
Community content is available under CC-BY-SA unless otherwise noted.