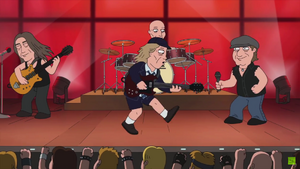 Their song "Back in Black" is played while Peter masters a forklift in "Peter Problems".

In "Take a Letter", Peter wonders if Stewie will have to wear a uniform like the guy in AC/DC. Brian wonders why guitarist Angus Young wears his schoolboy uniform to which Peter answers 'because he rocks.' In a cutaway gag, Angus notes that he never knew he'd have to wear it until he was sixty and that he is very cold.

Retrieved from "https://familyguy.fandom.com/wiki/AC/DC?oldid=198269"
Community content is available under CC-BY-SA unless otherwise noted.