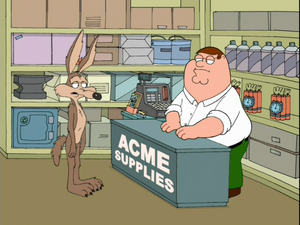 The Acme Corporation is a fictional corporation that exists in several cartoons, films and TV series, most significantly in the Looney Tunes universe. It appeared most prominently in the Road Runner/Wile E. Coyote cartoons, which made Acme famous for outlandish and downright dangerous products that fail catastrophically at the worst possible times.

Peter Griffin worked at the returns center for the company, as seen in "PTV".

Retrieved from "https://familyguy.fandom.com/wiki/ACME?oldid=198348"
Community content is available under CC-BY-SA unless otherwise noted.