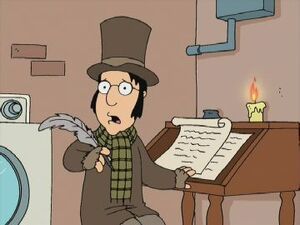 A Christmas Carol is a novella by Charles Dickens. Since its first publication in 1843, it has been adapted for theatre, film, television, radio, and opera countless times. The various adaptations have included straightforward retellings, modernizations, parodies and sequels.

In "Screwed the Pooch", Peter Griffin shouts at Bob Cratchit, who’s copying letters in the corner, telling him he has to work through Christmas. Cratchit asks, “But, sir, what of Tiny Tim?” Peter responds, “Bah, he and his ukulele shall go wanting” a reference to Tiny Tim the musician, not Cratchit’s son.

The basic plot of "Don't Be a Dickens At Christmas" is a parody of Dickens' A Christmas Carol.