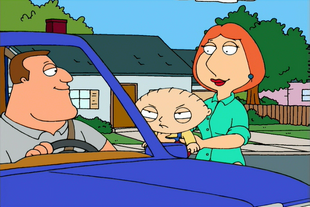 A Hero Sits Next Door
There's a new guy in town. 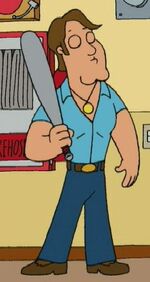 Mr. Weed introduces Guillermo, a ringer he hired to ensure the company’s victory at the annual softball game. Peter injures Guillermo with a wild pitch during practice and must find a new player to replace him.

Meanwhile, Lois is trying to become friends with the new neighbors, much to Peters disapproval, until he discovers that his new neighbor, Joe Swanson, played ball in college and invites him to play; when Joe shows up on the field, however, Peter and the other players are horrified to see that he is wheelchair-bound. Joe turns out to be a fantastic player, however, and leads the team to victory. In addition, he is also a heroic policeman, and soon becomes very popular to others.

The fame of Joe makes Peter jealous, and wants to be a hero too. Peter decides to perform a heroic deed to compete with Joe and attempts to stop a bank robbery in progress. He and Brian are taken hostage until Joe convinces the robbers to surrender. Peter is disappointed, but his family tells him that he is their hero.

Previous Episode /// A Hero Sits Next Door \\\ Next Episode

Retrieved from "https://familyguy.fandom.com/wiki/A_Hero_Sits_Next_Door?oldid=216444"
Community content is available under CC-BY-SA unless otherwise noted.