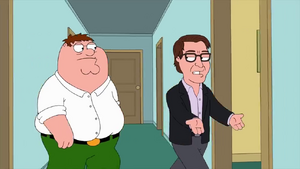 Aaron Benjamin Sorkin (Born June 09, 1961) is an American screenwriter and playwright, known for his work including The Newsroom, The West Wing and Sports Night, as well as the films Moneyball, The American President and Charlie Wilson's War.

In "Let's Go to the Hop", after licking a hallucinogenic toad, a teenager says he finally understands Sport Night, saying that it's a comedy that's 'too good to be funny'.

Aaron and other celebrities confront Peter after he uncovers a conspiracy to keep Family Guy from winning an Emmy in "Emmy-Winning Episode". Aaron takes Peter aside and informs him that one of the problems of the show is the habit of borrowing plots from other media and simply inserting a different character's name.

After finishing his script in "The Unkindest Cut", Elmer Hartman shoots up what he refers to as the 'Sorkin genius juice.'

Retrieved from "https://familyguy.fandom.com/wiki/Aaron_Sorkin?oldid=205333"
Community content is available under CC-BY-SA unless otherwise noted.