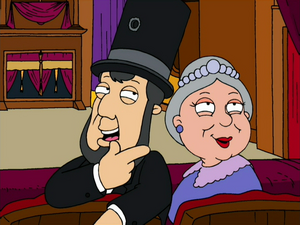 Abraham Lincoln (February 12, 1809 – April 15, 1865) served as the 16th President of the United States from March 1861 until his assassination in April 1865. He successfully led the country through the American Civil War by preserving the Union by force while ending slavery and promoting economic modernization.

As the war came to an end, Lincoln invited Lt. Gen. Ulysses S. Grant to a social gathering at Ford's Theater. Although Grant declined the offer, Lincoln was still in attendance with his wife Mary Todd Lincoln at Ford's Theatre. Shortly into the play, "Our American Cousin", actor John Wilkes Booth snuck up behind Lincoln and shot him in the back of the head. The bullet wound placed Lincoln into a coma, he would officially be announced dead early the next morning.

In "Mind Over Murder", a television commercial depicts the assassination of Abraham Lincoln while pitching the fictional product Mintos with John Wilkes Booth as spokesman. After the commercial plays, the Griffins sitting on the couch, with the exception of Peter Griffin, proclaim the commercial to be completely ineffective. Peter on the other hand stands up and walks out of the living room saying, "Must kill Lincoln."

He also appears in a cutaway in "Tales of a Third Grade Nothing", where his hat was too big to make the play pleasurable for Booth.

In "The Man with Two Brians", he notices neighbor Dale's lawn is overgrown. Dale is pissed off at Lincoln because he freed the slave that used to mow the lawn for him.

Lincoln is one of the four presidents featured on Mount Rushmore, alongside George Washington, Thomas Jefferson, and Theodore Roosevelt. The monument made appearances in "Dammit Janet!", "North by North Quahog", "Baking Bad" and "The New Adventures of Old Tom".

Stewie refers to the Amish as "Abraham Lincoln people" in "Amish Guy".

Lincoln appears in "Yug Ylimaf" during Brian's time travel with Cindy where they have sex in a neighboring balcony when he is shot.

Brian worries that he'll stick out while posing as Meg in "Our Idiot Brian", like the one guy in Lincoln's cabinet without a beard.

Peter tells Donald Trump that he'll never be a great president compared to the likes of Franklin Delano Roosevelt or Abraham Lincoln in "Trump Guy".

Lincoln is featured in "You Can't Handle the Booth!" which is shown during the recording of a DVD commentary by the Griffin family. As Lincoln tries to give a speech, Winona Ryder is being distracting in the background.

Retrieved from "https://familyguy.fandom.com/wiki/Abraham_Lincoln?oldid=224104"
Community content is available under CC-BY-SA unless otherwise noted.