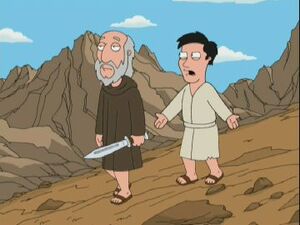 Abraham (originally known as Abram) is the founding patriarch of the Israelites, Ishmaelites, Edomites, and the Midianites and kindred peoples, according to the book of Genesis. Judaism, Christianity, and Islam are sometimes referred to as the "Abrahamic religions" because of the progenitor role that Abraham plays in their holy books. In both the Jewish tradition and the Qur'an, he is referred to as "our Father".

Isaac, as described in the Hebrew Bible, was the only son Abraham had with his wife Sarah. According to the Book of Genesis, Abraham was 100 years old when Isaac was born, and Sarah was beyond childbearing years.

Some time after the birth of Isaac, Abraham was commanded by God to offer his son up as a sacrifice in the land of Moriah. Just as Abraham was about to sacrifice his son, he was prevented by an angel, and given on that spot a ram which he sacrificed in place of his son. As a reward for his obedience he received another promise of numerous descendants and abundant prosperity.

In "Road to Rhode Island", when Brian Griffin asked Stewie to say a few words for his mother Biscuit at her burial, Stewie modernizes the biblical story of the almost-sacrifice.

In "Peter's Daughter", Peter Griffin pledges to be a better father to his daughter Meg than Abraham was to Isaac. In the cutaway, Isaac is disturbed and confused by the attempted sacrifice.

Retrieved from "https://familyguy.fandom.com/wiki/Abraham_and_Isaac?oldid=222423"
Community content is available under CC-BY-SA unless otherwise noted.