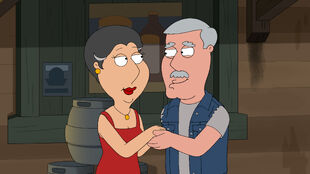 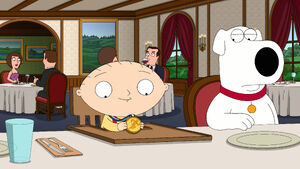 During the preschool games, Stewie wins a medal which he is proud of until Brian shatters his by pointing out that it's only a participation medal. When he realizes that all of his awards were trophies for participation, he sets fire to them but burns down the house by accident. Without anywhere else to live, the family has to move in with Lois' parents. When he and Brian learn of a pie baking contest, the latter convinces him to enter to win a legitimate contest but his initial attempts do not pan out well until he applies his knowledge. However, he ends up coming in fifth place but is satisfied when he realizes he actually earned this position. 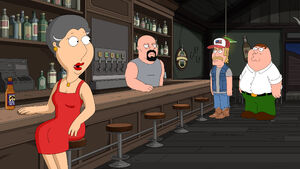 Meanwhile, Peter detests being around Carter because of the way he treats him such as when he messes up a game they play. When he tries to find a quiet place in the garage, Babs stumbles onto his hideaway and reveals that she's actually from a humble background as well. After they spend a drunken night on the town, Peter convinces her to live her life her way, but when she tells Carter this, they break up. She returns to her old home while Peter follows and tries to convince her to return. Instead, Carter finds he has to come down to her old stomping grounds to win her back. Peter tries to pass him off as a working stiff, but Babs forces the truth out of him. As she sends Carter away, he accidentally knocks over an entire row of trucks and is nearly beaten up until he is saved by her, satisfied with his effort and admits she no longer cares for her old life. As Peter also makes his mark on the bar, he is yelled at by Carter over a fancy lunch, having zoned out while ordering and urinating himself twice.

Back in their almost repaired home, Lois is happy that our parents have patched things up. To celebrate. Peter decides to get drunk and creep out the kids by offering to give Chris a 'Tom Brady' kiss. As Chris tries to ignore this, Stewie clears his throat down the hall to draw attention.

Retrieved from "https://familyguy.fandom.com/wiki/Absolutely_Babulous?oldid=216879"
Community content is available under CC-BY-SA unless otherwise noted.