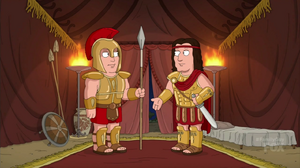 Achilles was a mythological Greek hero of the Trojan War. A widely told version of his story claims he was invulnerable because he was dipped into the river Styx by his mother, except for his heel which was used to hold him. He was subsequently killed near the end of the Trojan War by Paris, who shot him in the heel with an arrow.

In "Take a Letter", Lois explains to Gretchen that jealousy is her weakness, like Achilles' heel. In a cutaway, Achilles explains his weakness to Testiclles, who sheepishly admits he has a similar affliction.

Achilles is voiced by John Viener.

Retrieved from "https://familyguy.fandom.com/wiki/Achilles?oldid=198268"
Community content is available under CC-BY-SA unless otherwise noted.