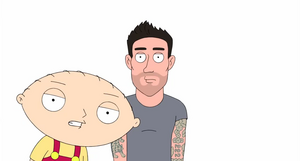 Adam Noah Levine (March 18, 1979) is an American singer-songwriter, musician and occasional actor known for being the lead singer of Maroon 5 and a judge on The Voice.

Adam provides his own voice as part of a cutaway in "Quagmire's Quagmire". After Stewie threatens Brian with blowing his Adam Levine dog whistle, Adam protests that his voice isn't that high, but Stewie pops into frame to assure the audience that it is.

In "Regarding Carter", Chris sings "Alone" on The Voice to the horror of the judges who wince as he sings. As they try to hide their reactions, Peter holds a gun to Adam's head and tells him to turn around.

Retrieved from "https://familyguy.fandom.com/wiki/Adam_Levine?oldid=214022"
Community content is available under CC-BY-SA unless otherwise noted.