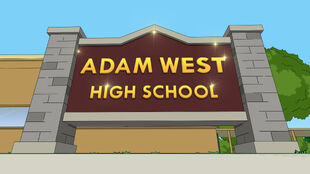 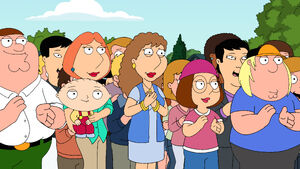 Quagmire sabotages Brian's appearance during the mayoral debate. When he confronts him later on his campaign bus, Quagmire's insults result in Brian knocking the driver cold and they wreck, breaking Quagmire's leg in the process. When Quagmire tries to call OnStar, the attendant turns out to be a previous 'date' of his, which leaves the bus barely hanging on the side of a cliff. 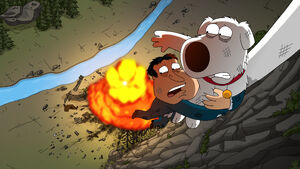 As time passes, they share their actual reasons for running for Mayor, with Quagmire wanting a street named after him and Brian is in it for pancakes. Brian tries to say something complimentary to Quagmire who rejects returning the favor. Brian tries to climb up and out but his shifting weight causes the bus to fall. As he leaps out the back of the bus with Quagmire's arms wrapped around his waist, Brian imagines the late Mayor West reaching out to grab his hand, later to realize he grasped a branch, where they are passed by Principal Shepherd on his way down to steal the late bus driver's ID.

The family reveals that since both candidates were believed to have been killed in the bus crash, the fans are encouraged to vote for the new mayor online. As Quagmire recovers at a 'pool party' at his place, one of his female guests slips up and allows Brian to hear that a party is going on. He climbs to the top of Quagmire's tiki bar and dives in, momentarily forgetting that Quagmire doesn't actually have a pool when he smashes into the ground.

Retrieved from "https://familyguy.fandom.com/wiki/Adam_West_High?oldid=214302"
Community content is available under CC-BY-SA unless otherwise noted.