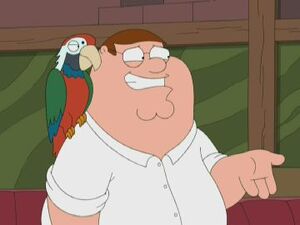 Adrien Beaky was a parrot that Peter Griffin stole from Dr. Jewish's veterinarian office in Long John Peter. He is named after actor Adrien Brody. After Griffin introduces Beaky to his friends, Joe Swanson believes that Peter looks like a pirate with the parrot on his shoulder. Peter then decides to become a real pirate.

Unfortunately, during the battle with Shelley Boothbishop to rob him of his sugar cane, tobacco and spices, Adrian Beaky is seriously injured. He is taken to Dr. Jewish's office where he convulses, falls off the operating table and flops around. A passing nurse steps on him and kicks him into a puddle of urine where his bowels release all over him. Dr. Jewish picks him up but gets upset because he gets some of the mess on his hands so he throws him against the wall where he dies.

Adrien Beaky joins several other animals of the show as well as the cast in singing "Blue Shadows On The Trail" in "Wild Wild West".

Retrieved from "https://familyguy.fandom.com/wiki/Adrien_Beaky?oldid=231685"
Community content is available under CC-BY-SA unless otherwise noted.