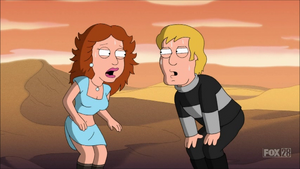 Adzin is the main character of a "Really Depressing 1970's Sci-Fi Movie Starring a Guy in a Turtleneck" that Stewie Griffin watches in "Stewie Goes for a Drive". After he and his companion cross a desert to escape "The Corporation", he finds an entire building manned by his clones. Convinced The Corporation has won, his companion convinces him there is only one solution and hands him a gun which he uses to commit suicide. Afterwards, his companion removes her face to reveal she was a robot.

He is voiced by Adam Alexi-Malle.

Retrieved from "https://familyguy.fandom.com/wiki/Adzin?oldid=198511"
Community content is available under CC-BY-SA unless otherwise noted.