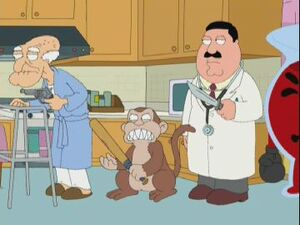 In "Death Is a Bitch", the varied passengers on the plane, nuns, Girl Scouts, etc., are reminiscent of the film.

Peter slaps Lois in the bathroom, yelling “Get a hold of yourself,” in "He's Too Sexy for His Fat".

Dr. Rumack, a character from the film, is portrayed by Leslie Nielsen. Rumack appears in Blue Harvest telling Han Solo (Peter) "I just want to tell you both good luck, we're all counting on you". C-3PO, played by Glenn Quagmire shakes Leia while saying "...and Leia's getting laaaarger."

Many characters, including Herbert, Evil Monkey, Elmer Hartman, Mayor West, and Kool-Aid Man line up to shake Stewie in "Prick Up Your Ears".

In "Peter's Daughter", The scene where Stewie and Brian are renovating the run-down house, and becoming confused with the requirement to say "over" when using the walkie-talkie may be a distant reference to the sequence in the movie, where confusion is caused by the name of Captain Oveur, pronounced "over".

When Brian starts to lie about how he likes Loretta in "Love, Blactually", Brian's nose starts to grow like Pinocchio's nose does. Brian also repeats the line, "free to pursue a life of religious fulfillment", which is a line uttered by Dr. Rumack.

"Airport '07" has many references to the film.

When New Brian walks into the kitchen just before the "I Like Farts" song, Peter says, "Oh, you have a guitar!" just like the mother of the sick girl does in the film Airplane!.

Jerome and Quagmire quote Jive in "Jerome Is the New Black".

Peter beats up a bunch of annoying people while holding in his poop in "Mom's the Word" as a parody of a scene where Rex Kramer (Robert Stack) beats up a mob of religious recruiters while calmly walking through the airport.

When Stewie is talking to Rupert about his issues with Brian in "The Woof of Wall Street", he admits he's probably boring him as the camera pans over to show Rupert has hung himself in a reference to Airplane!. In a scene, Ted Striker is talking to an old lady beside him and mentions that he is probably boring her, and when the camera pans over, it shows she has hung herself.[1]

Donald Trump claims that their 'Leslie Nielson' ratings are the highest in history in "Trump Guy", leading Peter to start a line from Airplane!, "Surely you can't be serious?" Trump, however, doesn't follow though with 'Shirley' and instead demands to not be called Leslie.

At the beginning of "Peter & Lois' Wedding" when the WiFi goes out, everyone starts to panic similar to how every passenger panicked after Elaine asked who could fly the plane, complete with two men sword fighting and a nun and Hare Krishna trying to strangle each other. The scene was repeated on the television during the Paul Reiser sitcom that younger Peter, Quagmire and Cleveland were watching.[2]

Retrieved from "https://familyguy.fandom.com/wiki/Airplane!?oldid=218311"
Community content is available under CC-BY-SA unless otherwise noted.