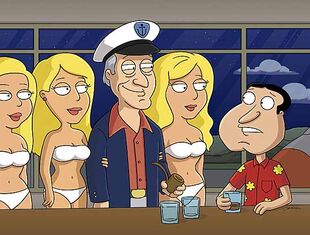 Excuse me Hef, I got a plane to land!!

Airport '07
Quagmire loses his job as a pilot. 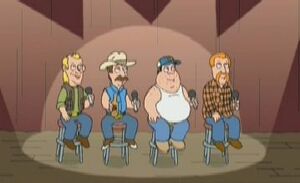 After seeing a redneck comedy show, Peter purchases a pickup truck and decides to become a redneck. He does such “typical” redneck things as bringing the couch out onto the lawn, propositioning Meg, and chewing tobacco. Eventually, after having to bring Quagmire to the airport, Peter steals Quagmire’s plane’s fuel thinking it will make his truck fly, causing the plane to crash. 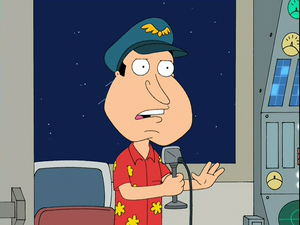 Quagmire loses his job, and after three weeks is living with Peter, first in the tree-house, and then in the house. During this, he exhibits his typical sex fetishes, such as sticking his foot into Meg’s mouth while she’s sleeping. Lois is fed up and forces Peter to help him get out of the house. Peter decides to attempt a hare-brained scheme with the help of Joe and Cleveland to fix Quagmire’s problems, which almost falls through until inspirational advice from Hugh Hefner prompts Quagmire to save the day, and thereby get his job back.

Retrieved from "https://familyguy.fandom.com/wiki/Airport_%2707?oldid=216362"
Community content is available under CC-BY-SA unless otherwise noted.