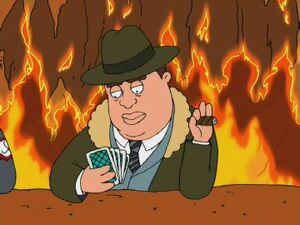 Alphonse Gabriel "Al" Capone (January 17, 1899 – January 25, 1947) was an American gangster who led a crime syndicate dedicated to smuggling and bootlegging of liquor and other illegal activities during the Prohibition Era of the 1920s and 1930s.

He is seen playing cards in Hell with Adolf Hitler, John Wilkes Booth, and Superman in "Holy Crap".

Retrieved from "https://familyguy.fandom.com/wiki/Al_Capone?oldid=210378"
Community content is available under CC-BY-SA unless otherwise noted.