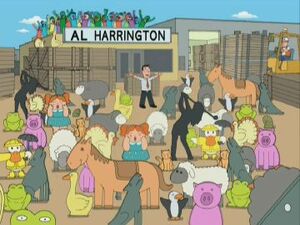 Al Harrington's Wacky Waving Inflatable Arm-Flailing Tubeman Emporium and Warehouse is a business in Weekapaug, Rhode Island. The proprietor of this business is Al Harrington.

In the second Stewie Griffin: The Untold Story segment "Bango Was His Name Oh", an advertisement was seen for his Wacky Waving Inflatable Arm-Flailing Tubemen.

Al was visited at the warehouse in "The Splendid Source".

Retrieved from "https://familyguy.fandom.com/wiki/Al_Harrington%27s_Wacky_Waving_Inflatable_Arm-Flailing_Tubeman_Emporium_and_Warehouse?oldid=215487"
Community content is available under CC-BY-SA unless otherwise noted.