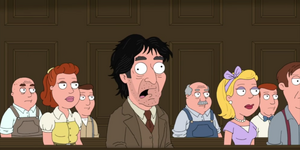 Alfredo James Pacino (born April 25, 1940) is an American actor and filmmaker, known for his work in The Godfather Saga, Dog Day Afternoon, Scarface, Heat and Scent Of A Woman.

In "Livin' on a Prayer", Joe attempts to solicit donations to the Policeman's Ball by claiming his captain does a very good impression of Pacino.

In "Secondhand Spoke", after seeing Chris picked on by bullies, Stewie notes that he is a bigger social outcast than Scarface. A cutaway gag shows Pacino's character of Tony Montana becoming very self-conscious when a "business" contact refers to him as "Scarface," noting that his doctor told him it wasn't very noticeable.

Chris does a poor impression of Pacino and his character from Scent Of A Woman in "The Simpsons Guy".

The Griffins watch an episode of The Tonight Show with Jimmy Fallon in "HTTPete" where Fallon advertises that the audience will lose all respect for Pacino after he forces him to play a game intended for children.

In "Dead Dog Walking", Stewie recounts the time Lois got hooked on coffee and bought an Al Pacino maker.

When Peter storms off to protest the removal of the statue of Pawtucket Pat in the episode of the same name, Lois compares his temper to that of Al Pacino's forehead liver spots, leading to a gag of the spots arguing.

Retrieved from "https://familyguy.fandom.com/wiki/Al_Pacino?oldid=231824"
Community content is available under CC-BY-SA unless otherwise noted.