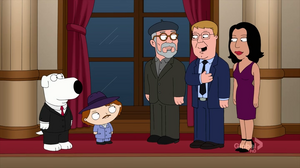 Alan Bennett (born 9 May 1934) is a British playwright, screenwriter, actor and author.

His output includes The Madness of George III and its film incarnation The Madness of King George, the series of monologues Talking Heads, the play The History Boys, and audio books, including his readings of Alice's Adventures in Wonderland and Winnie-the-Pooh.

Alan provides his own voice as one of the playwrights introduced to Brian at a party in New York while Stewie prepares for the opening of his Broadway play in "Brian's Play". When Brian tries to tout his own play, they pronounce it the worst piece of dreck they had ever seen and laugh at it.

Retrieved from "https://familyguy.fandom.com/wiki/Alan_Bennett?oldid=219594"
Community content is available under CC-BY-SA unless otherwise noted.