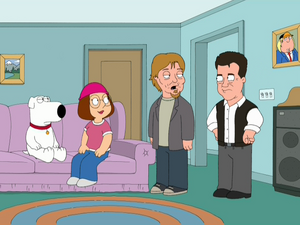 Alan Willis Jeffery (March 1, 1947-December 13, 2016), better known as Alan Thicke, was a Canadian actor, songwriter, and game and talk show host. He was primarily known for his role as Jason Seaver, the patriarch on the ABC television series, Growing Pains.

Though he did not appear on-screen, Thicke spoke at the '80s TV convention in "Brian Goes Back to College". It is stated he gets a lot of hate-mail.

He appears as Jason Seaver in "Not All Dogs Go To Heaven", after Meg Griffin brought Jeremy Miller in to substitute for Kirk Cameron to convert Brian to Christianity.

Prince and Alan Thicke encourage Meg and Chris to 'head towards the light' when they are caught inside of the house during an extermination in "Big Trouble in Little Quahog".

Retrieved from "https://familyguy.fandom.com/wiki/Alan_Thicke?oldid=228012"
Community content is available under CC-BY-SA unless otherwise noted.