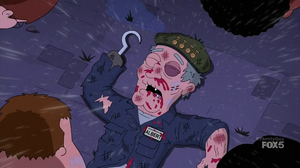 Albert is a hook-handed Korean war "veteran" and caretaker of the Quahog Asylum who tries to help the guys escape from the asylum after they get locked in trying to get ideas for a horror movie in "Peternormal Activity".

However, frightened by his appearance, they beat him to death and decide to bury his body, along with his car and not tell anyone. But as their conscious starts to get the better of them, particularly with Quagmire finding a way to give him a solid alibi, they secretly steal each other's shoves to leave at the scene of Albert's burial to frame each other. But when they realize they have their idea for their film, they break off their attack on each other. However, their film doesn't go over as well as they hoped and finding out that Albert faked being an honored veteran by stealing the medals he wore and belonged to the KKK, they feel better about themselves.

But back at the asylum, a hooked hand emerges from the dirt along with a door from the car they buried.

Albert is voiced by Danny Smith.

Retrieved from "https://familyguy.fandom.com/wiki/Albert?oldid=215826"
Community content is available under CC-BY-SA unless otherwise noted.