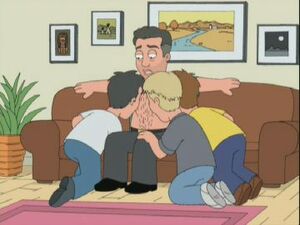 Alexander Rae "Alec" Baldwin II (born April 3, 1958) is an American film and television actor known for his work in The Hunt for Red October, The Departed and 30 Rock. He has also gained recent recognition for his frequent portrayal of candidate, and later the 45th President of the United States, Donald Trump, on Saturday Night Live.

He appears in "I Take Thee Quagmire" breastfeeding his younger, weaker brothers. Lois Griffin, who tried and failed to stop breastfeeding her infant son, Stewie, now knows how he feels.

In It's A Trap!, C-3PO calls Jabba the Hutt Alec Baldwin.

Alec drew Donald Trump's wrath in a Twitter rant, following a parody skit on Saturday Night Live on October 15th, 2016 in which Alec portrayed the Presidential candidate, which was defended by Seth MacFarlane. Donald was infuriated by SNL and publicly announced that it should be canceled. 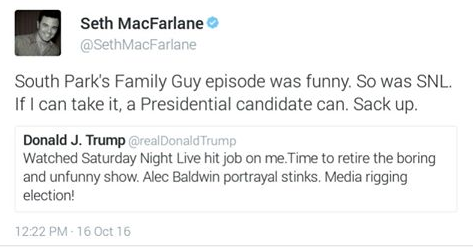 Alec and other celebrities confront Peter after he uncovers a conspiracy to keep Family Guy from winning an Emmy in "Emmy-Winning Episode". In this appearance, he is voiced by Jonathan Kite.

Retrieved from "https://familyguy.fandom.com/wiki/Alec_Baldwin?oldid=228559"
Community content is available under CC-BY-SA unless otherwise noted.