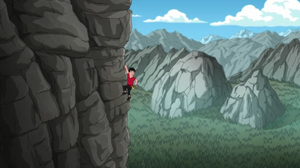 Alexander Honnold (born August 17, 1985) is an American rock climber. In 2017, he made the first free solo ascent of El Capitan, which was depicted in the 2018 documentary Free Solo.

In "Start Me Up", Stewie thinks Brian's idea to make a kickstarter scam is better than Free Solo narrated by a concerned Midwestern mom. A cutaway gag shows Alex scaling El Capitan for which he is criticized by said narrator for going too high and not instead having lunch at Applebee's.

Retrieved from "https://familyguy.fandom.com/wiki/Alex_Honnold?oldid=221289"
Community content is available under CC-BY-SA unless otherwise noted.