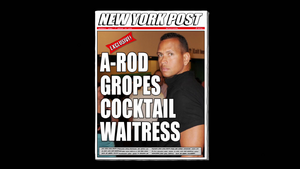 When Peter wins a chess championship at Washington Square Park by beating several players simultaneously in "The Most Interesting Man in the World" in a montage to demonstrate his new intelligence skills, the newspaper headlines celebrate the occasion except for the New York Post which instead focuses on A-Rod's groping of a cocktail waitress.

Retrieved from "https://familyguy.fandom.com/wiki/Alex_Rodriguez?oldid=198312"
Community content is available under CC-BY-SA unless otherwise noted.