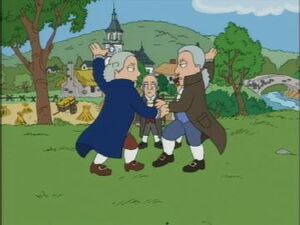 Alexander Hamilton (January 11, 1755/1757 – July 12, 1804) was the first United States Secretary of the Treasury, a Founding Father, economist, and political philosopher. Aide-de-camp to General George Washington during the American Revolutionary War, he was a leader of nationalist forces calling for a new Constitution; he was one of America's first Constitutional lawyers. Hamilton's heated rivalry with Aaron Burr resulted in a duel, in which Hamilton was mortally wounded.

In a cutaway in "Da Boom", Peter questions what would have happened to the American Forefathers if there were no guns. Hamilton and Burr are shown getting into a slap fight.

In "The Boys in the Band", Brian says he wrote a play about Alexander Hamilton, but admits it's not the same one as the award-winning, Hamilton.

In "Send in Stewie, Please", Stewie sings the song "Alexander Hamilton" from the musical Hamilton, which is about Hamilton's life.

Chris gets into trouble at school in "Stand By Meg" when he calls attention to Alexander Hamilton being white, in contrast to his portrayal in the rap musical Hamilton by Hispanic actor Lin-Manuel Miranda.

When the family finds out that Grover Cleveland married a girl that he'd raised since she was 11 years-old in "Trump Guy", Stewie notes that he's not getting a musical in a nod to Hamilton.

Retrieved from "https://familyguy.fandom.com/wiki/Alexander_Hamilton?oldid=225191"
Community content is available under CC-BY-SA unless otherwise noted.