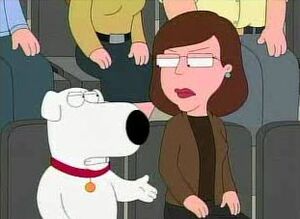 Allison Brooks Janney (born November 19, 1959) is an American actress, known for her role as C. J. Cregg on the television series The West Wing.

She provides assorted voices for Family Guy, including the editor for Teen People in "Dial Meg for Murder" and Crystal Quagmire in "Quagmire's Mom".

She also has a giraffe named after her in "Barely Legal".

There are several jokes in "Bri, Robot" about Allison Janney being tall. She has an Oscar and we have a great deal of respect for her.

Retrieved from "https://familyguy.fandom.com/wiki/Allison_Janney_(actress)?oldid=222090"
Community content is available under CC-BY-SA unless otherwise noted.