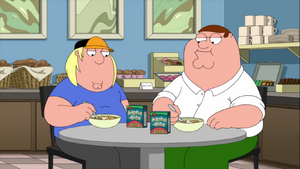 In "The Son Also Draws", Peter believes his Alpha-Bits are sending him a spiritual message until Brian points out that he's eating Cheerios.

When Peter goes deaf in "Peter's Def Jam", Joe tries to have him spell out messages with Alpha-Bits, but has already eaten all of the "L"s.

When Chris and Peter eat Alpha-Bits at a hotel buffet in "The Marrying Kind", Chris' cereal spells out 'FART' while Peter's encourages him to murder his family. He quickly eats the message before Chris can see it, but the cereal continues to berate him for his cowardice.

Retrieved from "https://familyguy.fandom.com/wiki/Alpha-Bits?oldid=231193"
Community content is available under CC-BY-SA unless otherwise noted.