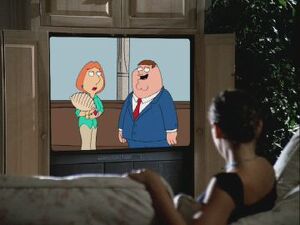 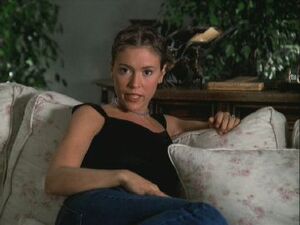 Alyssa Milano (born December 19, 1972) is an American actress who has appeared in a number of television series including Who's the Boss?, Melrose Place and Charmed. Her breakthrough role was with Arnold Schwarzenegger in the movie, Commando.

She was featured in a live-action sequence in "Mr. Griffin Goes to Washington" in which she is infuriated with Family Guy for making a joke at her expense, and asks her lawyer Joel to sue as a result, a reference to her propinquity towards potentially suing shows for featuring her name.[1]

Alyssa is the subject of a song idea tossed out by Quagmire in "In Harmony's Way", noting that he knew she was going to be hot at the age of nine.

Retrieved from "https://familyguy.fandom.com/wiki/Alyssa_Milano?oldid=204291"
Community content is available under CC-BY-SA unless otherwise noted.