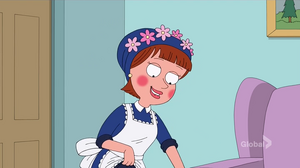 Amelia Bedelia is the title character of a series of American children's books. Amelia is a maid who repeatedly misunderstanding various commands of her employer by always taking figures of speech literally, causing her to perform incorrect actions.

In "Dr. C & The Women", Peter blames a misunderstanding on "doing" the dishes on "dirty Amelia Bedelia," who "cleans the carpet" by vacuuming her privates. She later pees on Stewie without having been given any directions.

Amelia is voiced by Rachael MacFarlane.

Retrieved from "https://familyguy.fandom.com/wiki/Amelia_Bedelia?oldid=198285"
Community content is available under CC-BY-SA unless otherwise noted.