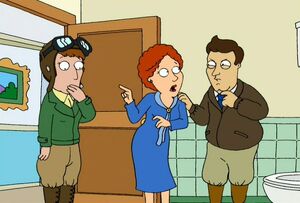 Amelia Earhart was a noted American aviation pioneer, and author. Earhart was the first woman to receive the Distinguished Flying Cross, awarded for becoming the first aviatrix to fly solo across the Atlantic Ocean. She set many other records.

During an attempt to make a circumnavigational flight of the globe in 1937, Earhart disappeared over the central Pacific Ocean near Howland Island.

In "Brian in Love", the Lindberghs are potty training their son when he is accidentally flushed down the toilet. They plan to fake a kidnapping but are concerned over Earhart's witnessing the events. Father Charles Lindbergh ominously suggests to leave everything to him.

She was mentioned in the tediously long version of the Maude theme song "And Then There's Maude" in "No Meals on Wheels".

Retrieved from "https://familyguy.fandom.com/wiki/Amelia_Earhart?oldid=178671"
Community content is available under CC-BY-SA unless otherwise noted.