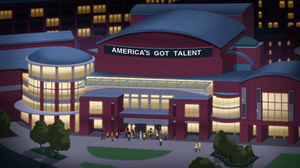 America's Got Talent is an American reality television series on the NBC television network, and part of the global British Got Talent franchise. It is a talent show that features singers, dancers, magicians, comedians, and other performers of all ages competing for the advertised top prize of one million dollars. The show debuted in June 2006 for the summer television season. From season three onwards, the prize includes the one million dollars and a show as the headliner on the Las Vegas Strip.

Peter performs an audition on America's Got Talent when he accidentally gets Stewie's harmonica stuck in his rectum in "No Country Club for Old Men". However, his performance of the theme to Sanford and Son is ruined when the harmonica is dislodged by a fart.

Retrieved from "https://familyguy.fandom.com/wiki/America%27s_Got_Talent?oldid=198319"
Community content is available under CC-BY-SA unless otherwise noted.