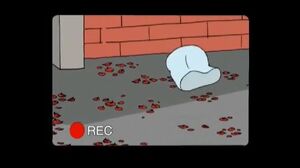 In "The Kiss Seen Around the World", as Peter is recording Stewie's first time riding a tricycle, he sees a paper bag fly by in the wind and records it, much like Ricky did in the movie, and even quotes the scene "There's so much beauty in the world in makes my heart burst...". God then comes on the screen, asking if Peter knows how complicated his circulatory system is, in an annoyed manner.

In "Peter Griffin: Husband, Father...Brother?", Peter has a fantasy about Cindi during a cheerleading routine in which she dances around before opening up her sweater, sending drumsticks flying out, a la the cheerleading practice in the movie. Peter eats one of the drumsticks, then realizing that it was Lois' hair.

Retrieved from "https://familyguy.fandom.com/wiki/American_Beauty?oldid=219224"
Community content is available under CC-BY-SA unless otherwise noted.