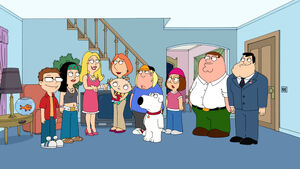 For a more in-depth look at everything "American Dad!", head over to the American Dad Wiki

American Dad! is an American animated television series produced by Underdog Productions and Fuzzy Door Productions for 20th Century Fox Television and for TBS in the Fall of 2014. It was created, in part, by Seth MacFarlane, the creator of Family Guy. The pilot episode aired in the United States on FOX on February 6, 2005, thirty minutes after the end of Super Bowl XXXIX ; the regular series began May 1, 2005, after the 4th season premiere and return of Family Guy after its few year cancellation. American Dad! follows the events of Central Intelligence Agency (CIA) agent Stan Smith and his family.