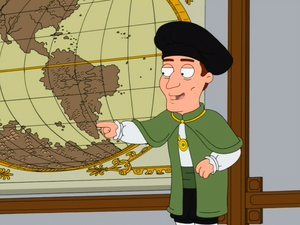 Amerigo Vespucci (March 9, 1454 – February 22, 1512) was an Italian explorer, financier, navigator and cartographer. The Americas are generally believed to have derived their name from the feminized Latin version of his first name.

A deleted scene intended for "Quagmire's Baby" was recycled into "The History of the World – According to Family Guy" in the Family Guy Volume 9 DVD set wherein Christopher Columbus unhappy that Amerigo Vespucci was getting the continent named after him while he has to settle for Columbus, OH.

Retrieved from "https://familyguy.fandom.com/wiki/Amerigo_Vespucci?oldid=198333"
Community content is available under CC-BY-SA unless otherwise noted.