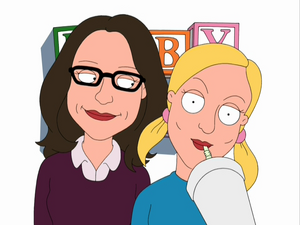 Amy Meredith Poehler (born September 16, 1971) is an American actress and comedian. She was a cast member on the NBC television entertainment show Saturday Night Live from 2001 to 2008. In 2004, she starred in the film Mean Girls with Tina Fey, with whom she worked again in Baby Mama in 2008.

In "420", Stewie Griffin bashes the plotline of Baby Mama. Fey, the woman who desires motherhood, and Poehler, who plays the surrogate, are then seen in an alternate version of the film where the baby is stillborn.

Chris Pratt is the guest on a confusing two-host talk show hosted by Brian and Stewie in a cutaway gag in "The Unkindest Cut". They pepper him with questions about his career, including working with Amy Poehler.

Retrieved from "https://familyguy.fandom.com/wiki/Amy_Poehler?oldid=204863"
Community content is available under CC-BY-SA unless otherwise noted.