An App a Day 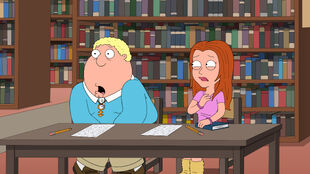 An App a Day
Chris becomes a sex offender after sending a girl a picture of his penis. 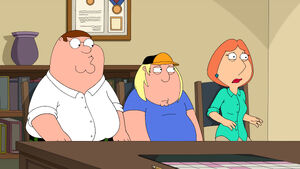 At the Clam, Peter finds out from his friends about cell phone apps when they use one to identify a song. Peter soon loads dozens of apps to his phone, which results in various situations. But when he gets it wet in the shower, he gives it to Chris who is able to fix it with advice from Meg. At school, Chris takes the advice of Neil Goldman to take a picture of his penis to send to a girl, but when she complains, Chris finds he is now considered a sex offender.

Chris' identity is exposed on the news and he finds he has to attend a rehabilitation class. When he finishes the class he is permitted to return to school but finds he is still a pariah by even Herbert. He goes to Quagmire for advice on how to change his image, but finds he will never shake his reputation. He decides to try his own method by having himself chemically castrated. 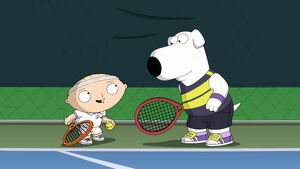 Meanwhile, Stewie requests Brian give him a ride to tennis practice. At the Quahog Racquet Club, Brian is impressed by the booze, girls and vomit and decides to join Stewie in a doubles tournament after lying about being a great tennis player. However, Brian blows off practice to hang out with the girls. When he gets around to participating, he is forced to reveal he has never played before, frustrating the highly competitive Stewie. He quickly learns what to do but in the big match, Stewie unloads on the umpire over calls and gets them kicked out of the club.

Previous Episode /// An App a Day \\\ Next Episode