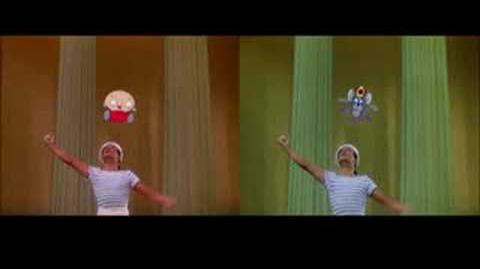 Anchors Aweigh is a 1945 musical comedy live-action/animated film, directed by George Sidney in which two sailors go on a four-day shore leave in Hollywood, accompanied by music and song, meet an aspiring young singer and try to help her get an audition at MGM. It stars Frank Sinatra, Gene Kelly, Kathryn Grayson, José Iturbi, Pamela Britton, Dean Stockwell, and Sharon McManus.

The movie is famous for an exciting musical number where Kelly dances seamlessly with the animated Jerry Mouse of Tom and Jerry. Tom Cat appears briefly as a butler in the sequence supervised by William Hanna and Joseph Barbera. Originally, the producers wanted to use Mickey Mouse for this segment.[1] Some sources claim Walt Disney initially agreed to loan out Mickey, but Roy Disney rejected the deal. According to Bob Thomas's book on Roy Disney, the studio was in debt after World War II and they were focusing on trying to get their own films out on time. According to Roy, they had no business making cartoons for other people.

In "Road to Rupert", Stewie Griffin has been inserted over Jerry to dance with Gene Kelly in "The Worry Song".

Retrieved from "https://familyguy.fandom.com/wiki/Anchors_Aweigh?oldid=211271"
Community content is available under CC-BY-SA unless otherwise noted.