And Then There's Fraud 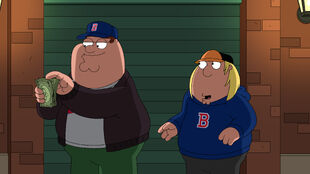 And Then There's Fraud
Peter and Chris get into the sports memorabilia business. 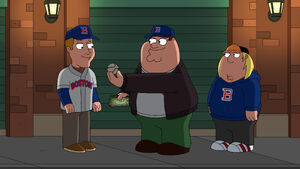 Peter takes Chris to a Red Sox game with him and he brings a baseball with him. But when a ball hit for a home run by a star player is mistaken for his ball and a buyer pays them $300 for it, they decide to get into the fake memorabilia business. They gather up used sports equipment and take it to a show to sell, and after more success, Chris decides to expand into other memorabilia, such as accidently selling Quagmire Sully sullenberger's pilot cap that was actually a Halloween costume. However, this causes him to worry that maybe his fraud is coming too close to home. Even worse, Peter finds out that Quagmire intends to get it signed at a meet-and-greet at the airport. Unable to talk him into letting Peter take the hat for him, Chris and Peter can only watch helplessly as Quagmire actually succeeds in getting it signed. Peter asks Sully about why he pretended not to know it was fake and he tells him that if it helps Quagmire have a little bit extra confidence when he needs it, he's going to help him any way he can. 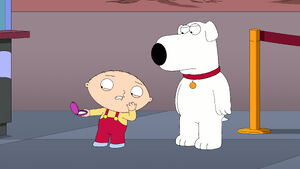 Meanwhile, Lois takes the kids to a museum and Stewie gets concerned when the cashier insists he looks older than an infant. He gets plastic surgery on his face so he looks younger and it works, but he goes too far and loses control of his facial muscles. They go to Dr. Hartman who does a good job, but when Stewie disregards the instructions for care, it comes apart during pre-school pictures.

As Chris and Peter realize they got away with their scam without any repercussions, Meg, who had been under close supervision for an unspecified offense all episode, escapes the house by sawing off her ankle and tracking beacon.

Previous Episode /// And Then There's Fraud \\\ Next Episode