And Then There Were Fewer 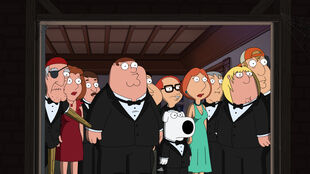 And Then There Were Fewer
Some vacations are to die for.

Plot: Peter receives an invitation to a dinner party in his honor, hosted by an unknown guest. The Griffin family arrive at a stately mansion, surrounded by an ocean of rocky waters. After arriving, several other guests arrive, announcing that the dinner is supposedly in their honor as well. Pondering why they were all invited to the mansion, the group decides to enter the estate, and are lead by the mansion's maid, Consuela, to the dining room. As they begin conversing with each other, their host is revealed to be

actor James Woods, along with his girlfriend, Priscilla. Woods states that he has become a born again Christian, and has invited them to the party to make amends for all of his wrongdoing. After Woods leaves the room, Quagmire's new girlfriend, Stephanie, is suddenly shot. Immediately suspecting it was Woods who shot her, the group leaves the residence, but are suddenly stopped when a tree collapses their only exit across a bridge. Left with no way out, the guests return to the mansion, and attempt to call for help. Realizing that there is no reception, and the only landline phone has been cut dead, Woods suddenly emerges amidst accusations from the guests of murder. Deciding to take him to the scene of the crime, the body has mysteriously disappeared. The lights briefly go out and back on revealing Woods has been stabbed.

Suspecting one of the guests is the killer, they begin to search for the murderer, and stumble upon a gun timed to shoot Woods, which accidentally shot Stephanie instead. Discussing who could have killed Woods, each of the guests are pointed out as having a personal motive to commit the act, and begin fighting. During the scuffle, they stumble upon a secret entrance to a dimly lit study, as well as Woods's secret diary, revealing each of his misdeeds towards the guests. After another power outage, Mort Goldman's wife, Muriel suddenly disappears, causing the guests to suspect her as the murderer, and begin searching for her. As the search begins, Muriel is found stabbed as well, revealing she is not the murderer. Returning to the lobby, they discover Priscilla has also gone missing, leading them to believe she was the murderer. Jillian's husband, Derek, goes searching alone to find a cell phone signal to call the police. He is struck by a Golden Globe Award and pushed from one's of the mansion's balconies. The group decides to stick together as one, and suspect whoever leaves the group to be the true murderer. Searching several of the guests rooms, the award is found underneath Tom Tucker's bed. Priscilla is found in a ceiling vent, causing Tom to run from the room while being chased.

The next morning, the police are called to the residence, and Tom is arrested. Beginning to pack her things, Lois decides to speak with Diane Simmons about her feelings in having to anchor the news alone. Lois then intuitively discovers that Diane is the true killer, leading Diane to pull a pistol on Lois. Diane reveals to Lois that her life has been going downhill since she turned forty years old. Tom had her successfully replaced as co-anchor with a younger woman. She also reveals that she had dated and depressingly broken up with Woods, and that she had ultimately paid Priscilla to persuade Woods to become a born again Christian, set on making amends with those he had done wrong. Diane planned to kill Woods and frame Tucker, but when the plan went awry and Stephanie was killed by mistake and went on to murder Priscilla, Muriel and Derek as well to keep them from revealing her as the killer. Taking Lois hostage, Diane leads her to the edge of the island, intending to shoot her over the towering cliffs. Suddenly, Diane is mysteriously shot in the back from an upstairs window, where she loses her balance and falls off the cliffs to her death. It is revealed that Diane was shot by Stewie with a suppressed sniper rifle, who vows that the only one to kill Lois would be him.

Previous Episode /// And Then There Were Fewer \\\ Next Episode