And the Wiener is... 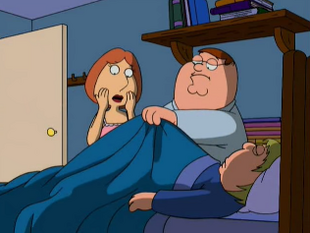 And the Wiener is...
When Peter realizes that Chris has a bigger penis, he is crushed and has to find a way to make himself secure in his manhood again. 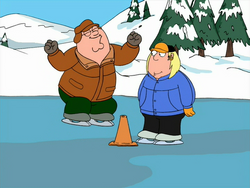 Peter is sure that his son Chris will never beat him at anything, from skating races to stacking dinnerware on top of his head. But at the sauna, he discovers Chris has an enormous penis, easily bigger than his own. Suddenly insecure, Peter tries buying a long, red car, which is caught in a collision and shortened to an extreme amount as a bus full of pretty models drive by, and joins the National Gun Association. 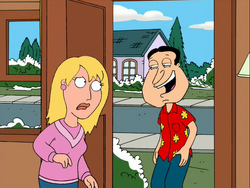 While hunting, Peter and Chris are attacked by a bear, and Chris drives it away.

Meanwhile, Meg tries out for the cheerleading squad but is accepted into the flag girl squad instead. At the game she is pelted with rancid meat, and Lois devises a plan for revenge when Meg is invited to a party. Meg is reluctant at first, and is tricked into kissing a pig. Lois reveals her backup plan, to have Quagmire scar them for life.