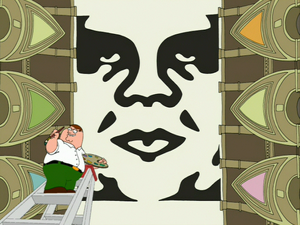 André René Roussimoff (19 May 1946 – 27 January 1993), best known as André the Giant, was a French professional wrestler and actor. He is well known as Fezzik in the classic movie, The Princess Bride. His great size was a result of acromegaly, and led to him being dubbed "The Eighth Wonder of the World".

In the World Wrestling Federation (WWF), Roussimoff is a one-time WWF Champion and a one-time WWF World Tag Team Champion. In 1993, he was the first inductee into the WWF Hall of Fame.

In "The Cleveland-Loretta Quagmire", Peter paints the ceiling of the Sistine Chapel with the likeness of André the Giant in an attempt to improve the image of the Catholic Church.

The family watches the film My Dinner With André the Giant on television in "Brian the Closer".