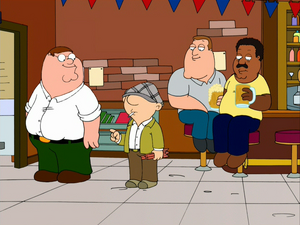 Andy Capp is a British comic strip character created by Reg Smythe, seen in The Daily Mirror and The Sunday Mirror newspapers since August 5, 1957. The strip is syndicated internationally by Creators Syndicate. Originally a single-panel cartoon, Smythe later expanded it to four panels. The character is also licensed as the mascot for a line of snack foods.

In "And the Wiener is...", Andy shoots darts with Peter Griffin at The Drunken Clam. His wife finds out where he is and they get into a long argument. Glenn Quagmire accidentally gets involved.

While getting a pelvic exam in "Turkey Guys", Lois gets a "Capp smear" from Andy Capp.

Retrieved from "https://familyguy.fandom.com/wiki/Andy_Capp?oldid=171244"
Community content is available under CC-BY-SA unless otherwise noted.