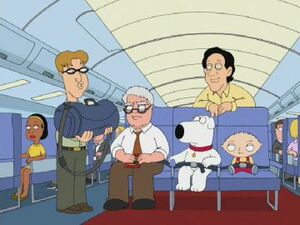 Andy Rooney (January 14, 1919 – November 4, 2011) was an American radio and television writer. He became most famous as a humorist and political commentator with his weekly broadcast A Few Minutes With Andy Rooney, formerly Three Minutes or So With Andy Rooney, a part of the CBS News program 60 Minutes since 1978.

He makes an appearance in "Road to Europe" with Andy Dick and Jerry Seinfeld on the same airplane flight as Brian and Stewie Griffin.

In a distant future, Tom Tucker has stylized his eyebrows in "Rich Old Stewie" like Andy Rooney's just before he died.

Andy is voiced by Mike Henry.

Retrieved from "https://familyguy.fandom.com/wiki/Andy_Rooney?oldid=219703"
Community content is available under CC-BY-SA unless otherwise noted.