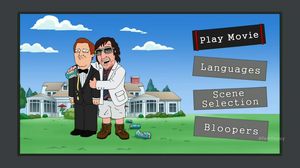 David Andrew "Andy" Samberg (born August 18, 1978) is an American actor, comedian, rapper and writer best known as a member of the comedy group The Lonely Island and as a cast member on Saturday Night Live and Brooklyn Nine-Nine. As a film actor, Samberg has appeared in Space Chimps, Nick and Norah's Infinite Playlist, I Love You, Man, Hotel Transylvania and Cloudy with a Chance of Meatballs and their sequels.

Brian and Peter are stuck watching the DVD menu screen to That's My Boy in "Our Idiot Brian", starring Adam Sandler and Andy Samberg.

Retrieved from "https://familyguy.fandom.com/wiki/Andy_Samberg?oldid=201264"
Community content is available under CC-BY-SA unless otherwise noted.